The fun doesn't end when you finish the roll


I'm quite organised when it comes to buying presents and find that I start wrapping them up as soon as December rolls round. This usually gives me ample enough time to actually 'forget' what I've bought so it makes it even more of a surprise on Christmas Day.

Most people come to the end of their giftwrap and the tube gets immediately thrown away right? Not in my house and definitely not when Chunky is around. He has some ingenious ideas for them.

I would love my children to be able to play a musical instrument to a good level one day but please don't let it be a didgeridoo at 6am. This isn't the wake-up call I usually expect. Marginally better than a violin though I expect.

We don't live in a mansion and our garden is smaller than a postage stamp so when it comes to playing golf it has to be of the crazy variety and INSIDE. Oh yes, there were beakers as holes and tunnels built from wooden blocks. It was looking good until Mummy interfered and broke the course they had set up. (Sorry Sweetpeas for falling over it and messing it all up but I didn't expect such a maze to appear on my landing!)

Harvey is very keen on Octonauts and as such most of his imaginary role-play is submarine / water themed. A little bend at the end of the roll and voila! A periscope.

It just goes to show that, with a little imagination , a lot of fun can be had with something that would usually be thrown away immediately.

In the summer we used kitchen roll tubes taped together to make binoculars and went 'on safari'. Who knew lions, elephants and zebras roamed the uncut lawns of Cambridgeshire? 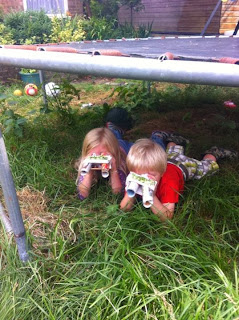 Long live cardboard tubes and avoiding the washing up!
Posted by Unknown at 14:03