Is it bedtime yet?

Picked Harvey up from pre-school and he proceeded to tell me his day. Usually I just get "I did nothing" which I know is complete nonsense so this was an amazing day.

"Mummy, one day there was this bear and he jumped out

Obviously he is talking about the Michael Rosen book, We're Going on a Bear Hunt. Or at least I hope so. a bear wouldn't want to eat Harvey anyway ~ far too much to eat in one sitting!Collecting Alyssa then this afternoon involved Harvey's usual antics of running around, falling over and telling everyone that he " was 3, now 4". He's still quite concerned that he hasn't got visibly taller since his birthday. That's what is meant to happen on your birthday, right?

Alyssa read for the majority of the way home. It's a book all about dinosaurs poems and some of the words are incredibly hard to pronounce. I gave up when it came to the dinosaur alphabet. "Quetzacoatlus, Seismosaurus and Zigongosaurus" were all new to me.

avoiding the washing up now for a night of learning about dinosaurs and bears. Can't beat a good book. 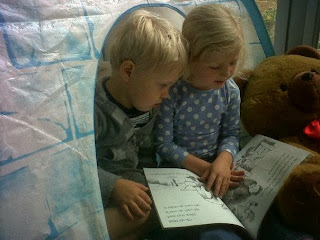