The recent social media idea of posting photographs with no make up on to increase awareness and also raise funds for Cancer Research has, in my opinion, been a big hit. Lots of people just on my friends list have been doing it and I'm proud of every single one of them.

I wanted to write a post today to raise awareness of the importance of the 21st March. (tomorrow!)

It is World Down Syndrome Day (http://www.worlddownsyndromeday.org/lots-of-socks) and you are encouraged to wear LOTS OF SOCKS or ODD SOCKS in order for people to ask questions and therefore raise awareness. Don't forget to take a photo too and post it on your social media accounts. Let's get people talking and asking questions about these things. Learn the facts about these things and don't judge. I'm happy to say that I've been very fortunate in my life to have met some some lovely people that have also happened to have Down's Syndrome. Both them and their families have an amazing amount of strength when it comes to coping with some negative attention from some members of the public. I hope that days like tomorrow will soon stop such negativity.

Life is too short to match socks in my opinion. I send my children to school with matching socks and the majority of my socks are black but with different coloured toes and heels. I very rarely have them matching though!

"Is it school today? Do I have to have my socks the same"

This is Harvey's statement every morning and usually the answer is yes but tomorrow, he can wear as many socks as he likes, wherever he wants to and none of them need to match. 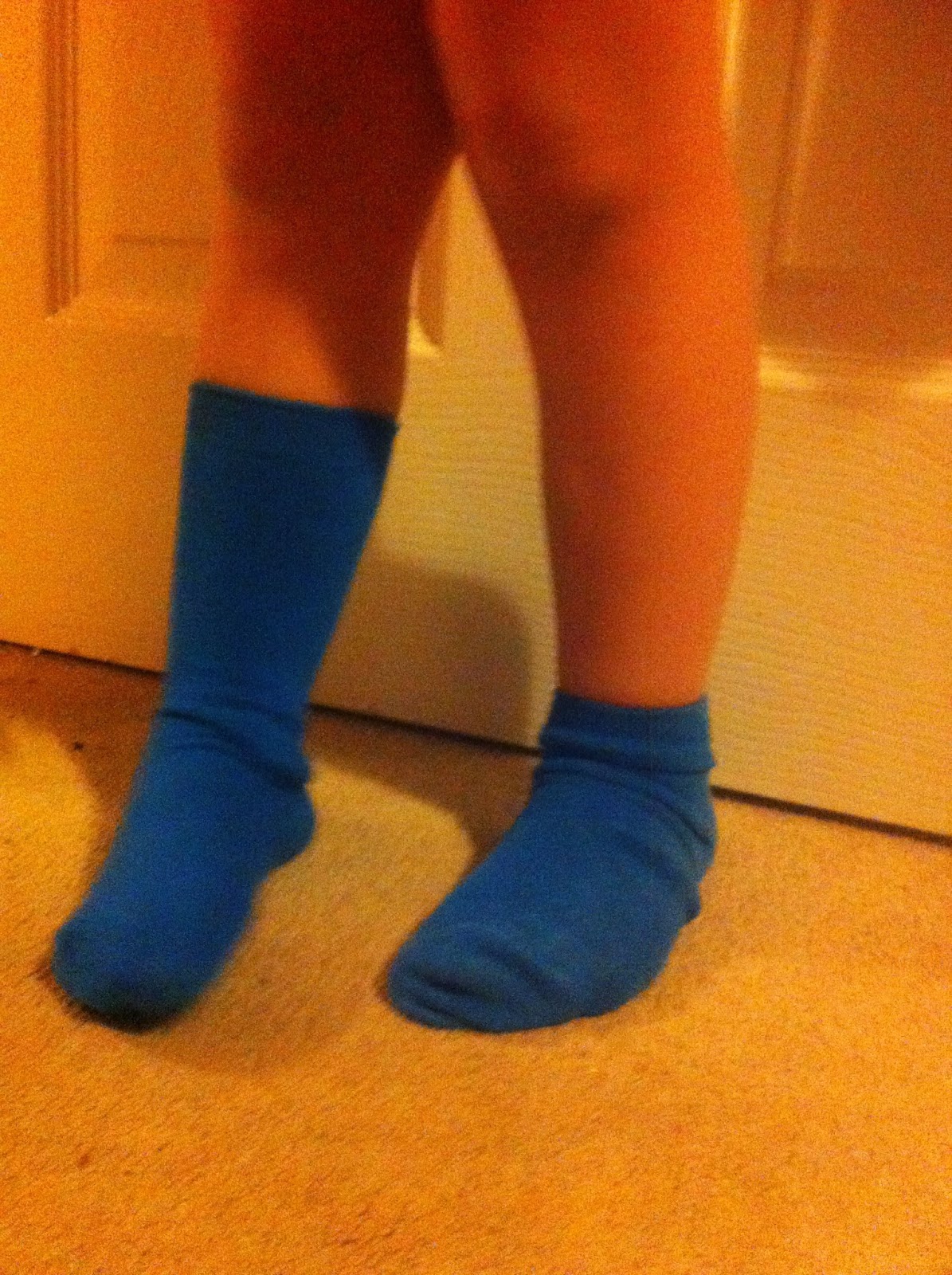 (One of Alyssa's photos of her brother. Comes in handy for this post! Thanks Alyssa. I shall pay Royalties to you for using it. x)

avoiding the washing up and mis-matching our socks ready for tomorrow.


I love my choice of names for my children. Alyssa is unusual without being too crazy and lots of her friends can easily say it and spell it. Her Great Grandad however insists it isn't a real name and continues to call her Lisa.

Her middle name is Bryony which wasn't my favourite of names I have to admit to start off with mostly because people pronounce it as briny like the salty sea. I can't help but sing "beautiful briny sea" when I say it. Now though, I love it.

Her initials are ABS ~ yes, like Anti-lock Braking System. My little way of linking her to how I had met her dad through a common love of cars. It was either that or her name may have been Nova, Saxo or Ferrari. Needless to say, I went with Alyssa~ much prettier! I did have over 60 names on the list for her though when she was born.

Harvey was the only boys name we could agree on. Don't really know where it came from.... 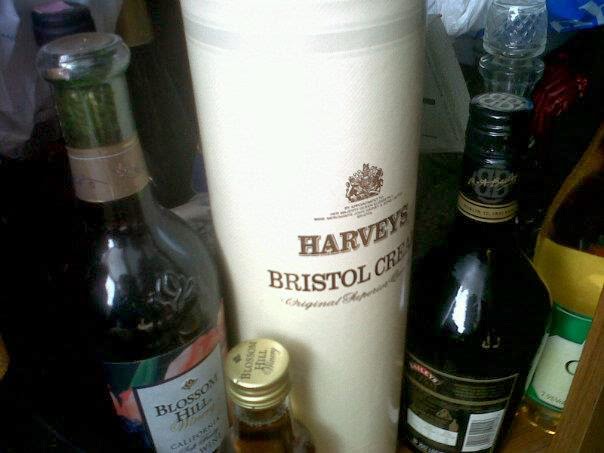 Bailey could have been another option now I've mentioned it along with Lambrini, Blossom and Vimto if he'd turned out to be a girl. (I'm joking!)

I couldn't imagine Harvey being called Boris for some reason. Not because it isn't a good name but that I really think once you've named your baby, another name just wouldn't suit them. I did try calling him Boris for the afternoon but he didn't answer to it. (Mind you, he ignores me when I say Harvey too so perhaps that's not his name either.) Comments please on what his 'real' name is and one that he will respond to would be good for me.  Albert perhaps, Winston maybe or he may be named after the Royal baby and be called Brian. 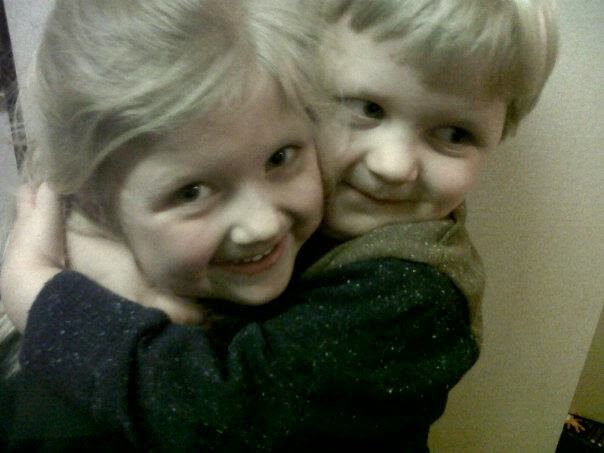 avoiding the washing up and thinking about names.


I'm not one for formal exercise unless watching the latest fitness DVD on the sofa with a bag of crisps and thinking " wow, that looks hard work." counts.

I keep fit by having a Harvey. Just a simple walk to school is a workout in itself. This morning it is froggy (as he calls it) and they decided that our walk to school would need spicing up with a few star jumps. I hasten to add that I didn't join in with that although potentially that could liven up the school run. Loads of mums and dads random doing push-ups on route as another parent decides to jump over them as kind of a Thursday morning hurdle race. Would make an interesting sight with parents in their Lycra or shellsuits (remember those?!) maybe hula-hooping along the street. 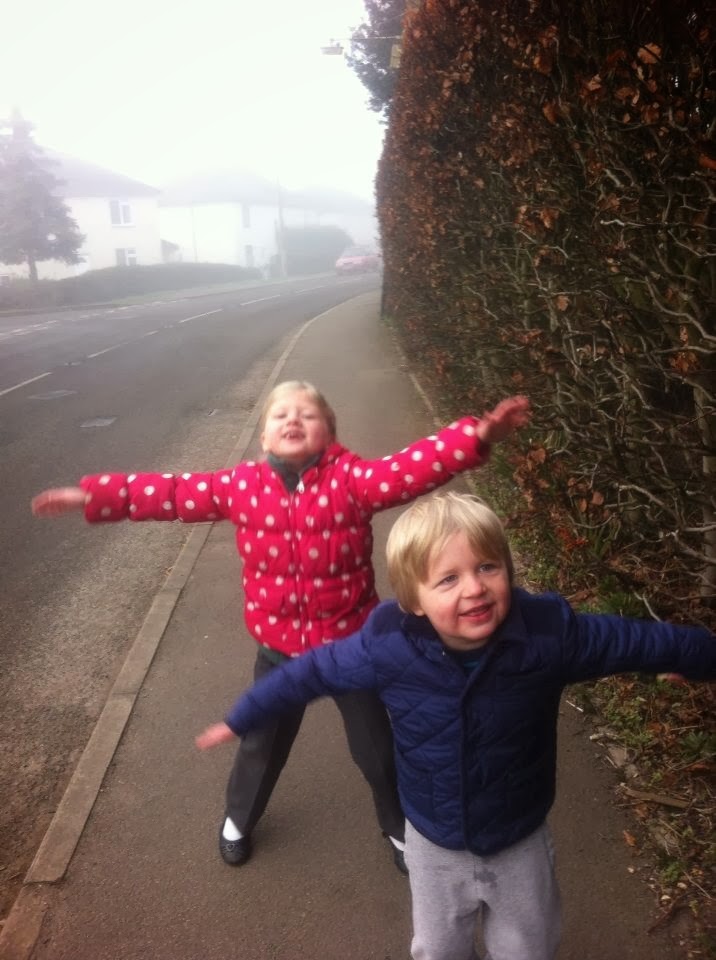 I'll just point out about his trousers before someone mentions it. Harvey will have his usual breakfast of cereal and then sometimes mention that he hasn't had any pudding.

"Why do we have pudding with lunch and dinner then if we don't have it for breakfast?"

He opted for an apple to eat on the way, catching most wet things on the way past them hence the wet on his trousers!

avoiding the washing up and exercising on the way to school.
Posted by Unknown at 09:35 1 comment:


I try to make use of the mantra of  REDUCE, REUSE, RECYCLE so I reuse jiffy bags and bubblewrap when I post things and also cardboard boxes before they go in the recycling bin.

Some items arrived in a hue cardboard box this week. It's far too big to store anything in,can't really be used for moving home as it would never fit in a car so that only leaves one thing.....

Harvey decided he would like his very own castle. What 4 year old little boy wouldn't? (Ok, I admit it. This 29 year old is quite keen on owning a castle one day too.)

We cut down the sides of one end of the box to make a drawbridge. Attaching some string (leftover from something and was in the craft box), he could then sit inside and pull the drawbridge up.

I had to cut out a window as apparently it was far too dark in there for him but then that was it. A good few hours he played with that yesterday and it's carried on today too.

This morning I have found a blue blanket for the water around the castle and we have made some fish from paper and jiffy bags that have seen better days. A fishing rod was made from a wooden spoon and string and he's happily sitting there fishing. 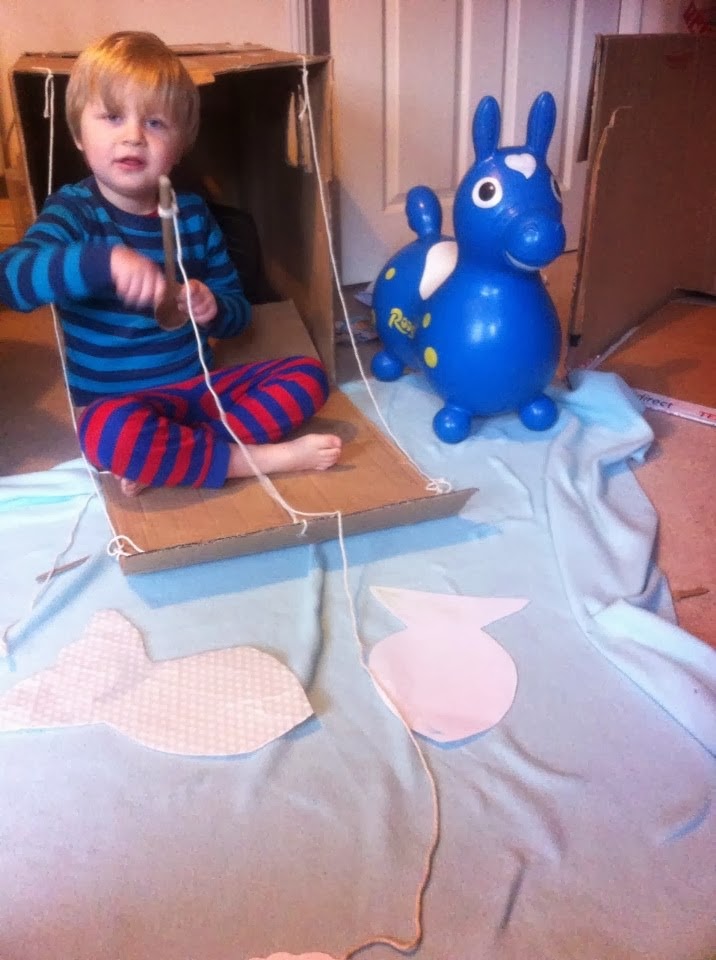 "Don't use your teeth to cut the sticky tape. Your adult teeth won't grow back. The tooth fairy will still come though."

The tooth fairy is obviously on his mind as Alyssa lost her third tooth this week after it being wobbly for 4 days.  She got a £1 coin in her pot and a little thank you note. Why the tooth fairy hasn't caught on with modern technology and offered Pingit, PayPal or bank transfer I will never know ~ would save her carrying around those heavy coins! Alyssa used to ask what the tooth fairy looked like but after she left her business card for the first tooth, Alyssa is quite happy now. 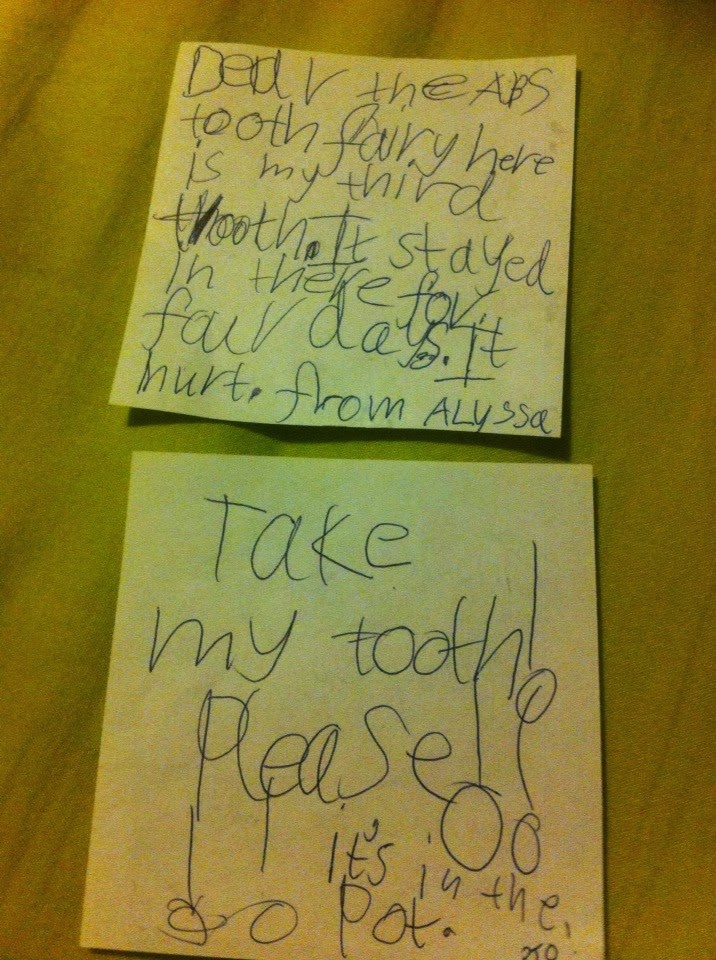 avoiding the washing up and playing cardboard castles.


This morning I set my alarm a little earlier as it is World Book Day and they needed to go to school dressed as their favourite character from a book.

Alyssa was torn between Dorothy from The Wizard of Oz or an Oompa-Loompa from the Roald Dahl classic, "Charlie and the Chocolate Factory".

This is how she left the house this morning. 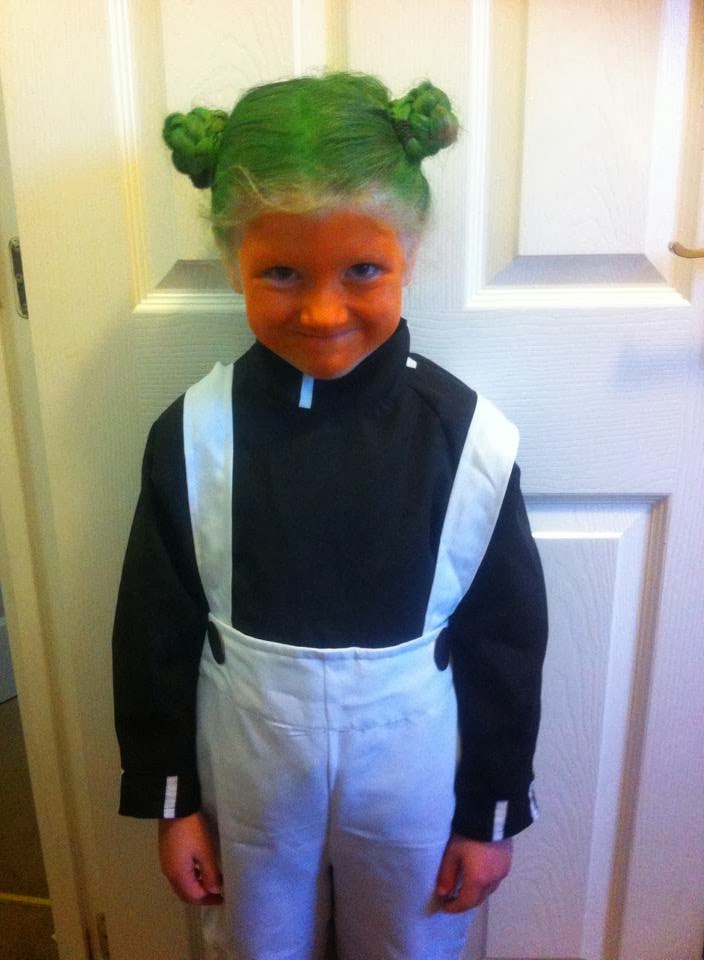 Dorothy has obviously applied too much fake tan that she's turned orange and also her dyed blonde hair has turned green from swimming! Sort yourself out Dorothy.

I used Snazaroo orange facepaint and some green hairspray which *fingers crossed* will wash out this evening.

Harvey was either going as Mr Tickle from Mr Men classics or Captain Barnacles from the Octonauts books. This is quite a 'new' series but it teaches about the undersea world and is really quite interesting. Both costumes were simple tabard designs as I don't expect him to last the morning still wanting to wear a costume. He lasted 5 minutes as Mr Tickle and then went to school as the Octonaut. 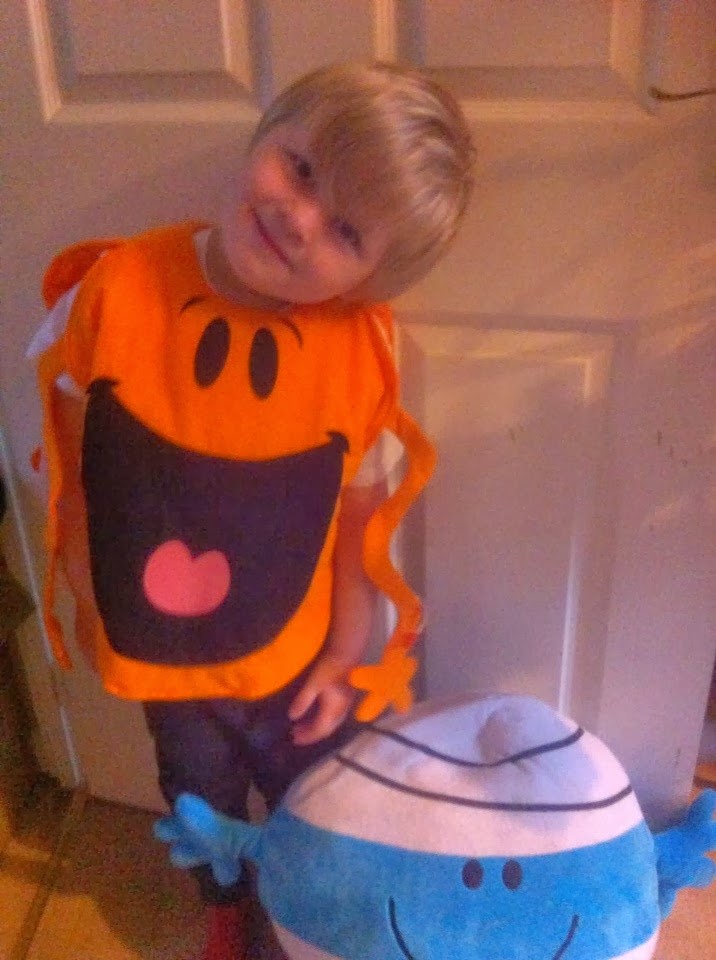 You're never too young or too old to enjoy a book I don't think. Alyssa reads nightly to Harvey which has improved her reading no end and it is also a time where they can do a bit of brother/sister bonding without any arguments. I sit and listen and then usually drift off to sleep. A book is a great addition to a bedtime routine although Harvey always insists on the same few stories.

Who knows what they may choose for next year?

I'd love to hear what your children went to school as today or what you would choose to go as if your work participated in World Book Day. 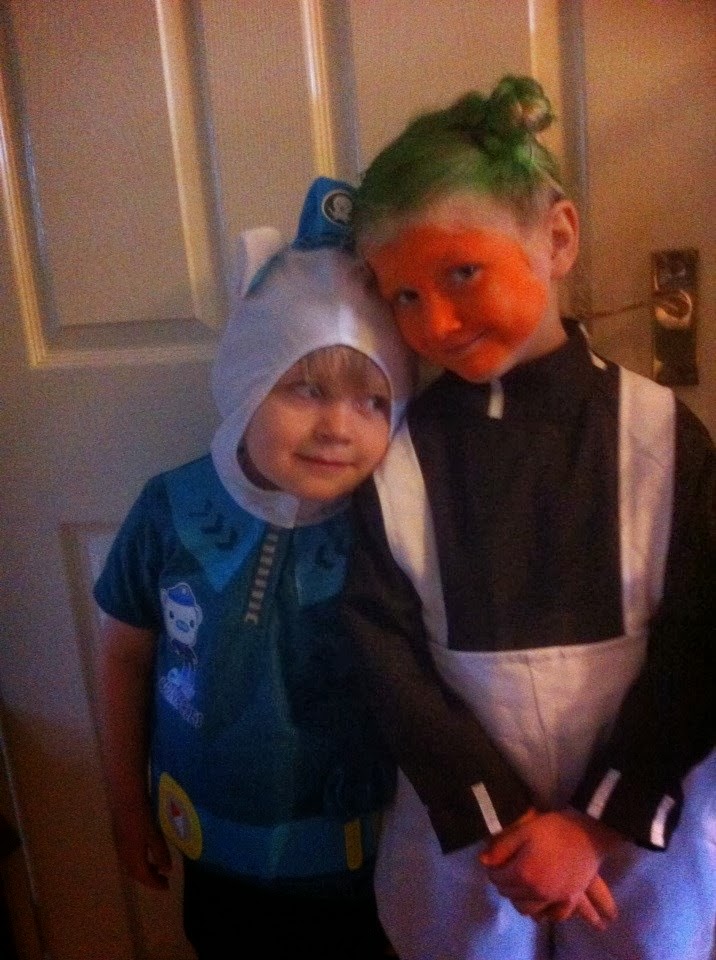 avoiding the washing up and reading.


Harvey has a habit of wanting to just sit and play on the computer so I have to ration his time and encourage him with different tasks. This afternoon was baking and I lured him in by saying he could use the mixer. He is so going to grow into a gadget-obsessed man.

I had made a banana bread recently..(were you aware that if you don't mash bananas enough, they turn pink?! I can assure you that's true as I managed a vibrant pink banana bread.) We thought we'd give it another go and added in some maple syrup and some chocolate chips for good measure.

Does that look yummy Harvey?

"Nope, it looks like a big pile of gloop." 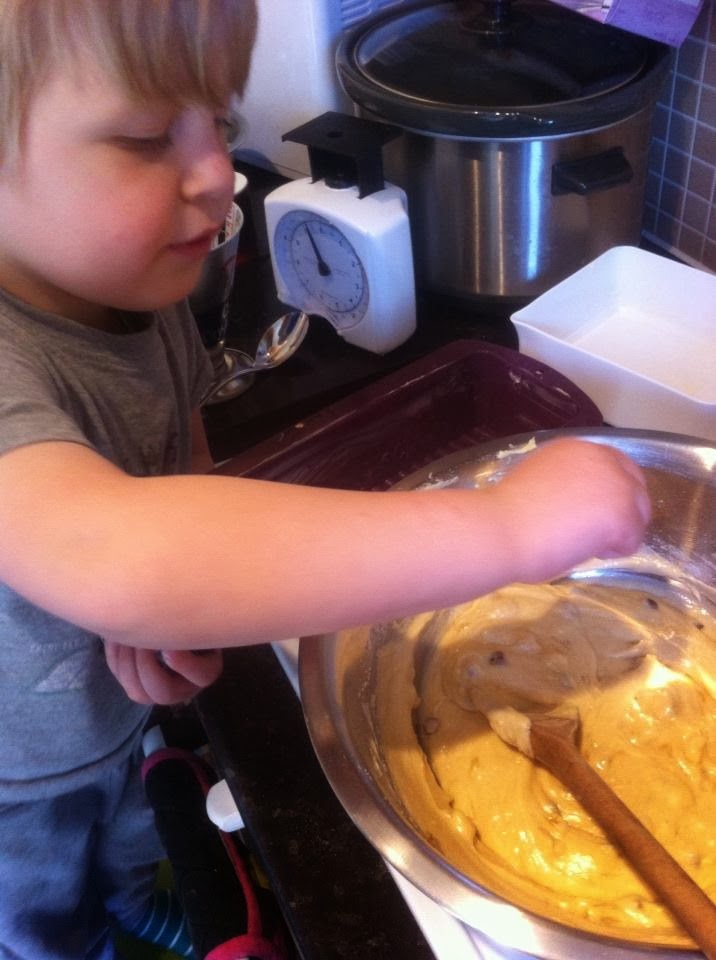 An hour later and it was time to eat it. The 'gloop' was edible and, as Harvey says..... 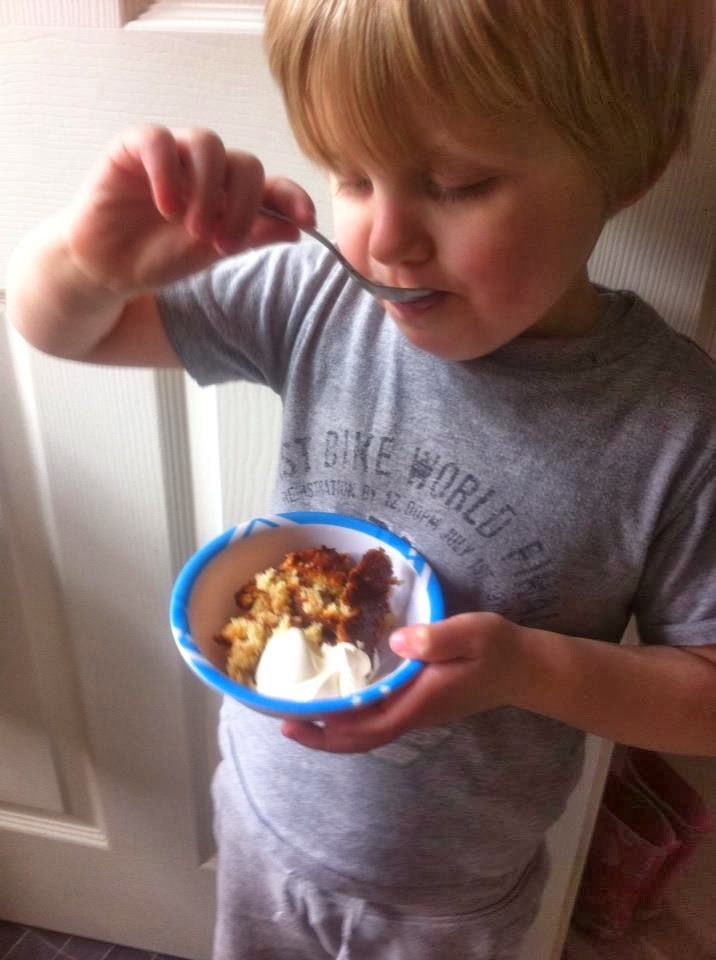 avoiding the washing up and making edible gloop.
Posted by Unknown at 15:20 5 comments: