Alyssa has her own little strawberry patch which she's had for a few years now. It's just outside the door so that they are easy to pick but unfortunately, the slugs seems to be enjoying them too.

I asked my Grandad if he had any advice seeing as he used to grow them for decades.

"I'll come round at sunrise everyday and eat them all first." 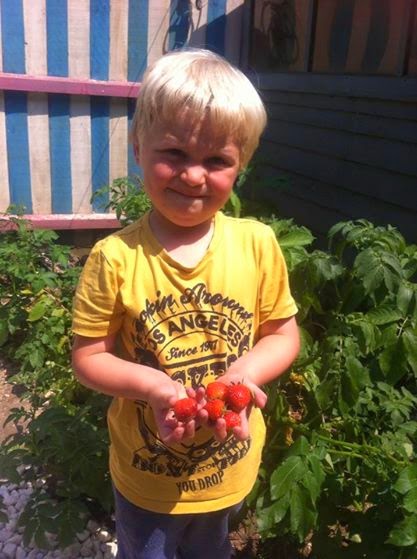 Have also been doing a bit of 'cupboard clearing' so made a sponge from a packet sponge mix. The jam inside was made in the breadmaker and it was so easy so will definitely be doing that again ~ if the home grown strawberries make it as far as the kitchen. 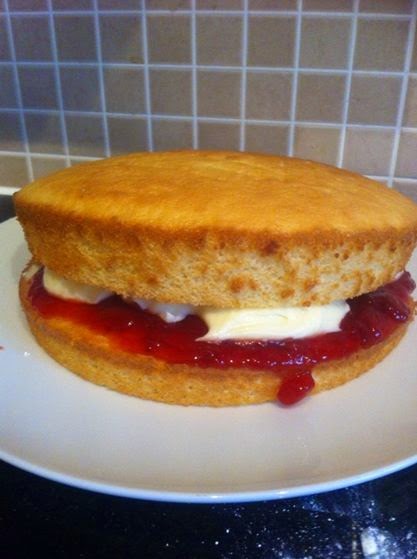 There are lots of baking ideas and recipes on my blog but this has to be one of my favourites. It is easy, fast and contains chocolate. 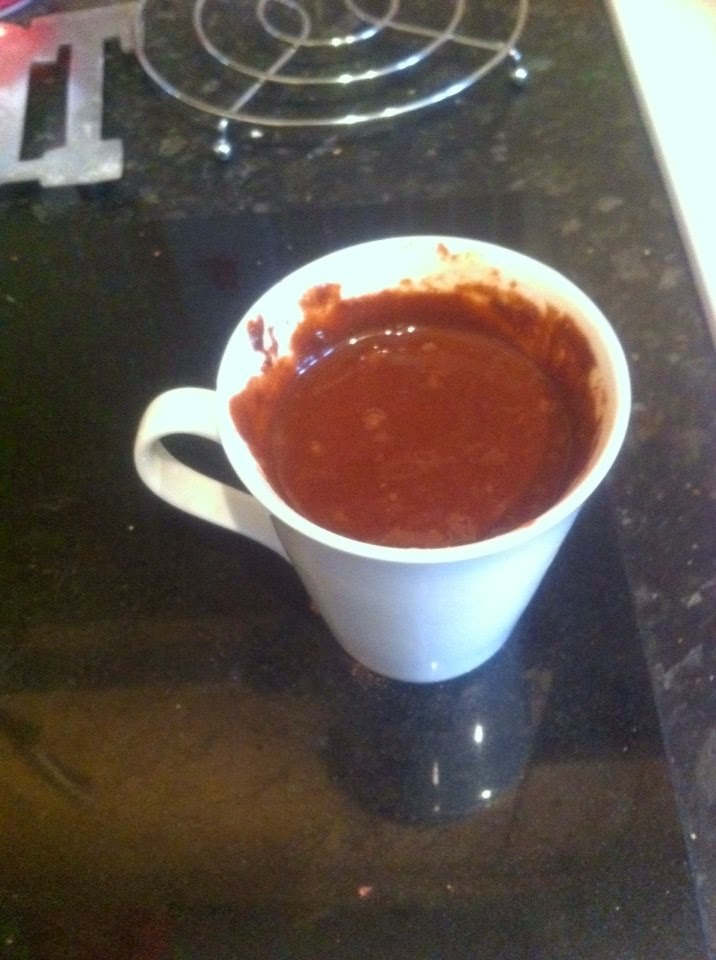 Microwave on full for 3 mins.  (This will vary so enjoy experimenting.)

It will start to rise above the mug so don't panic. 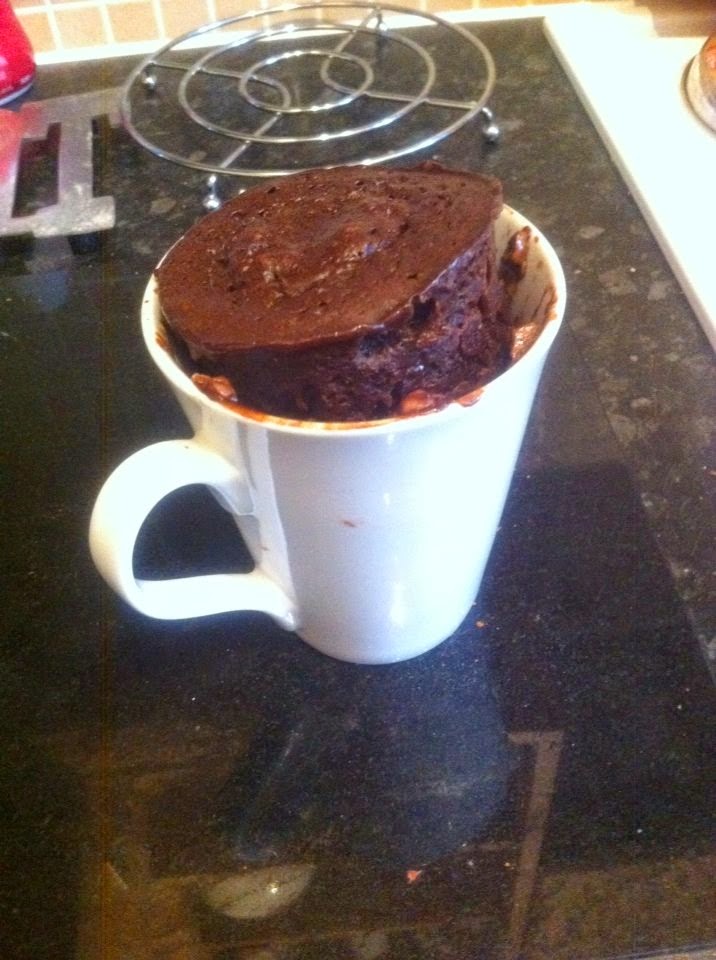 Sometimes the flour gets stuck to the bottom so I tend to turn my cake out into a bowl and eat with ice cream, clotted cream or custard. Oh and chocolate sauce.......oh and some sprinkles.... 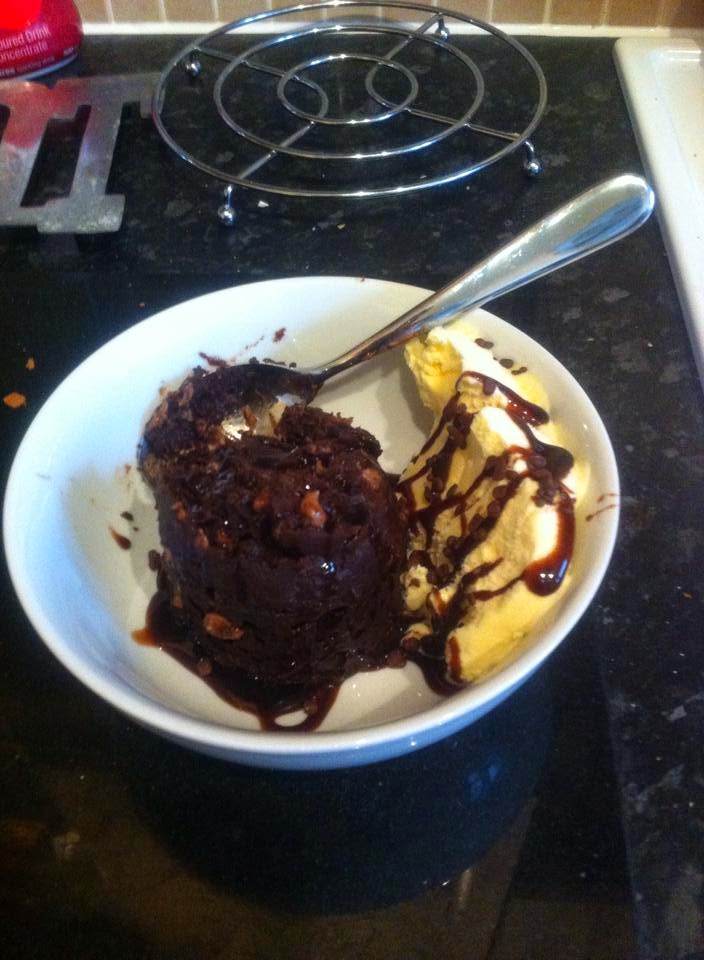 The original recipe I found in a recipe book titled "chocolate" by igloo books.

It states that it has 1571 calories. To be honest though, that's got to be a misprint?! I reckon both the 1s shouldn't be there...and perhaps even the 7 too.

It's a quick treat in a mug and only need to wash up a small amount of things. Brilliant.

(Warning :  naughty words included in this post so move on if it may offend.)

Advertising often works well in this household and mainly on Harvey. Today I send out a truly heartfelt apology to my neighbours who may have heard Harvey singing out the advert to "Gladstone Brookes". Not anything major except he was under the illusion that they were actually singing.....

I also apologise for the continuous calls out from Harvey to come to the fence to receive the latest 'present' he's got for you. I think half of my pebble path may now be in your garden! Sorry.

They have both enjoyed listening to a fellow neighbour though as he's played his music and they've danced round the garden to the likes of Phil Collins and The Monkees. Great day in the sunshine sorting out the shed and mending it ..(excuse the garden ~ it's work in progress!)


REMEMBER ~ no disco is complete without a broom.

avoiding the washing up and enjoying the garden.


So this is Harvey wearing his coat. 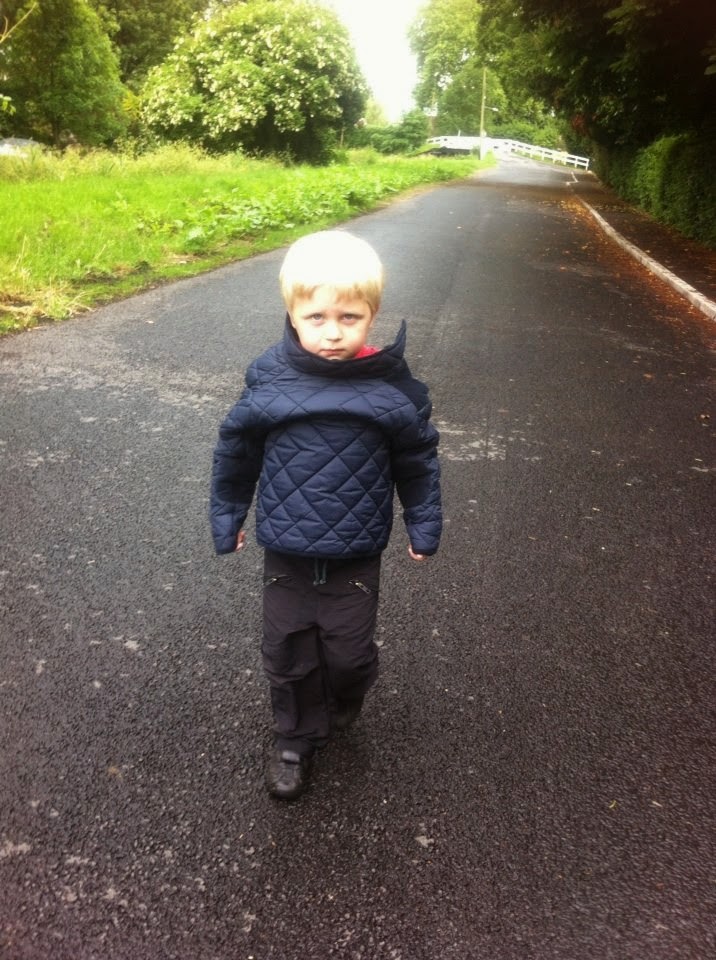 Thank you so much to the passenger of the white van who insisted hanging right out of the window as they drove past shouting"...his coat's on backwards...."

I did actually realise and I even buttoned him into it after he insisted it needed to be done up else he'd be cold. To be honest, when you have a Harvey in your life, getting him out the house in any clothes is a positive in itself. If you've read my blog before, you'll possibly remember his previous statements pieces too. Bendy socks anyone?

This was his chosen outfit the other day ~ thank goodness he didn't venture outside like that though! 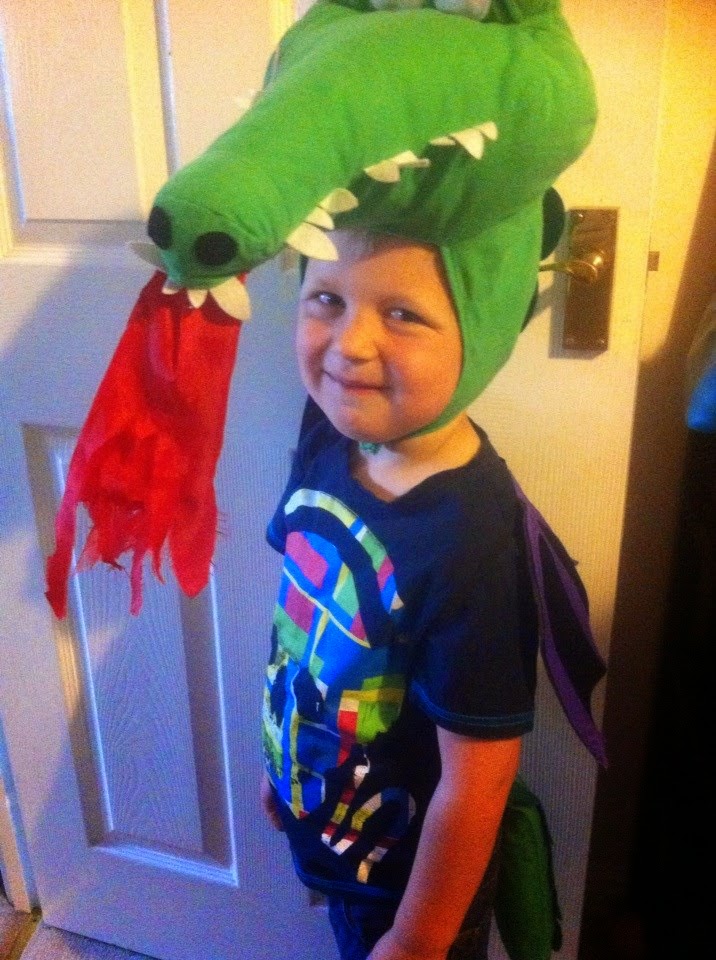 He was being a "dragon bat" apparently. Didn't you know?! This is all the rage in Paris and Milan!
Posted by Unknown at 21:18 4 comments:


My lovely auntie came and finished off my painting of my stairway a few weeks ago. I had started it over a year but when it had got too high I'd given up!

The colour is called 'Emily'. It's a lovely deep turquoise colour but yes, I chose it solely for the name. I'm strange like that.

I'd ordered a vinyl wall decal and,as it arrived this morning, there was no time than the present to get it slapped onto the wall. No waiting another year to get things done.

First thing was to place it onto the wall and anchor it down with some tape horizontally across the middle and at the corners. 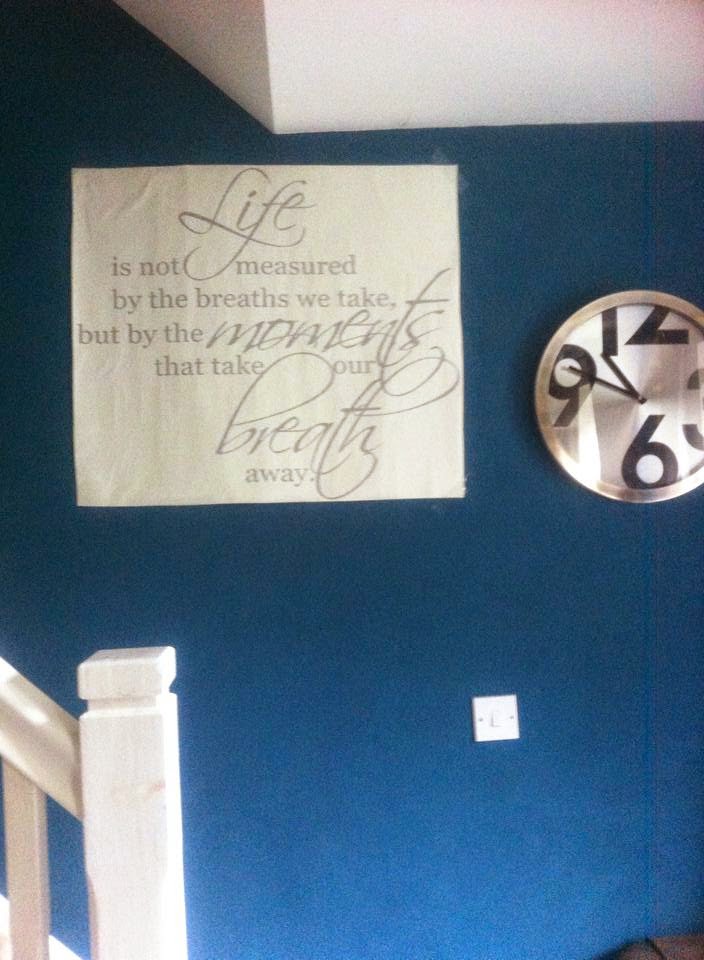 I apologise if anyone heard me swearing when the tape fell off and the whole thing sashayed down to the ground. Some more hands would definitely have made the whole task a lot easier....and not the 8 legs from this which was a few cms from my head I later realised! 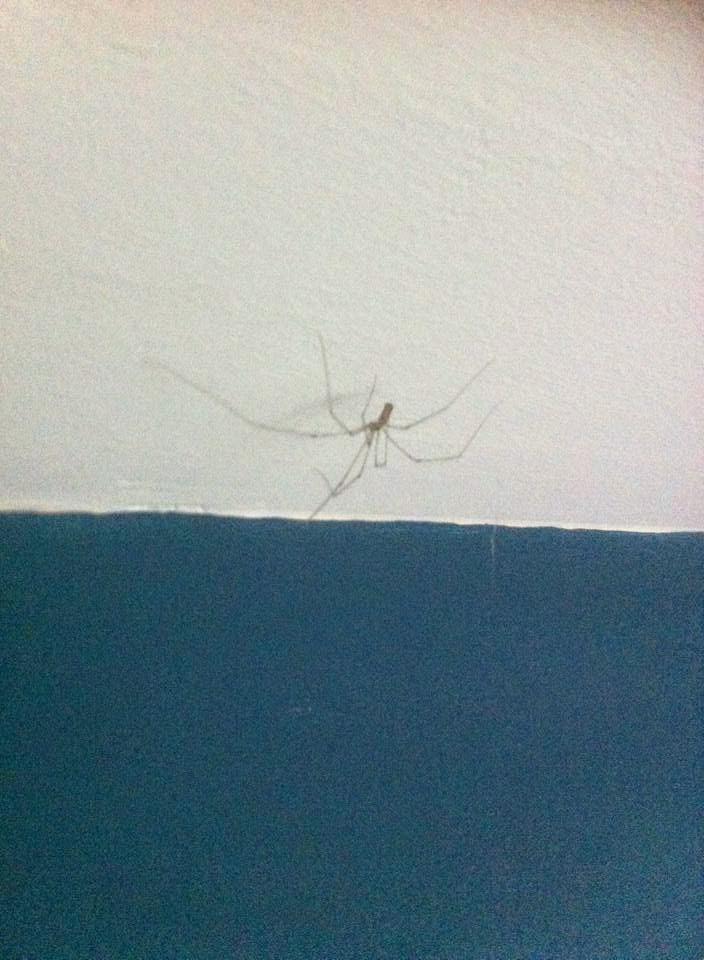 After removing the tape from the top 2 corners, I peeled the top application layer from the backing paper, making sure the decal was stuck on the application layer. When I reached the tape across the middle, I cut away the backing paper. Using a brand new squeegee found lurking in a cupboard, still with the tag on...(I'd obviously really needed that when I bought it!) I then stuck the decal back to the wall working from the middle outwards and up.


After a few minutes to allow the adhesive to stick that to the wall, I then had to do the same with the lower half.

I now had the decal stuck on the wall but still had the application layer to remove. 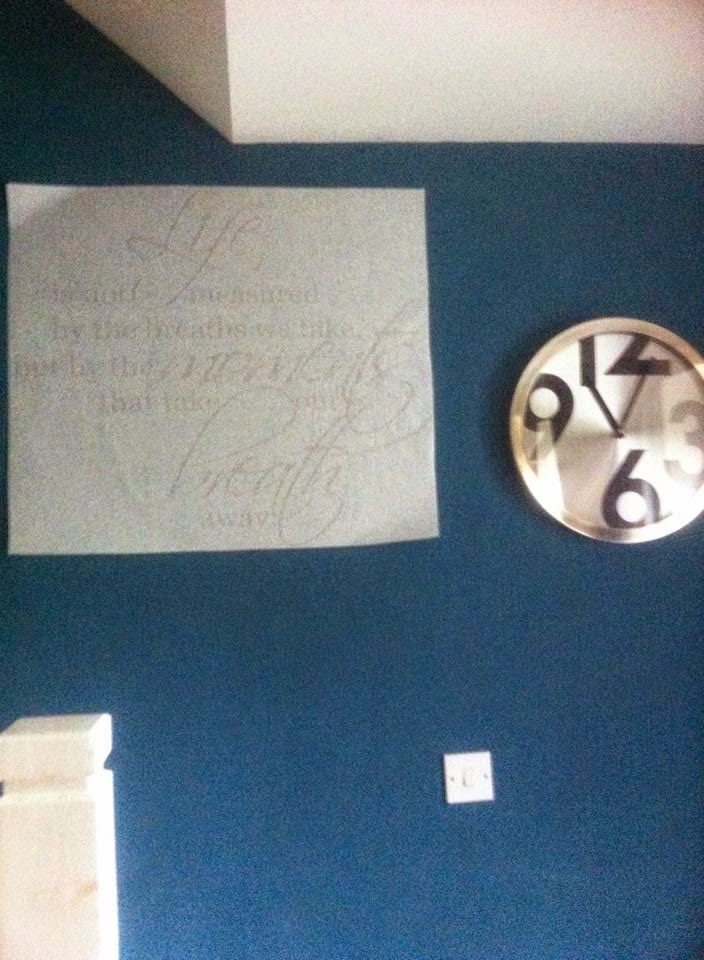 After waiting 10 minutes, I peeled back the paper leaving the decal stuck to the wall. 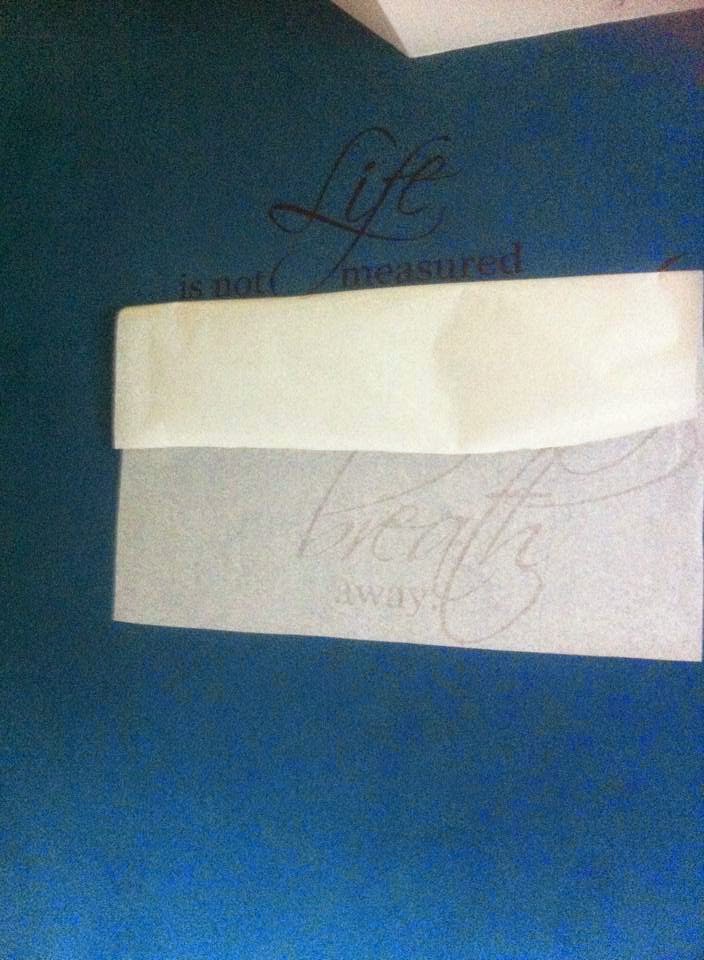 The whole thing took about 40 minutes and that included finding the equipment needed and also putting the spider outside.

In hindsight, perhaps having it in white would have been a better option to make it stand out from the other side of the room. I would have asked for some help too if only for someone to say it was put up straight. It looks fine to my eye though so I'm happy. 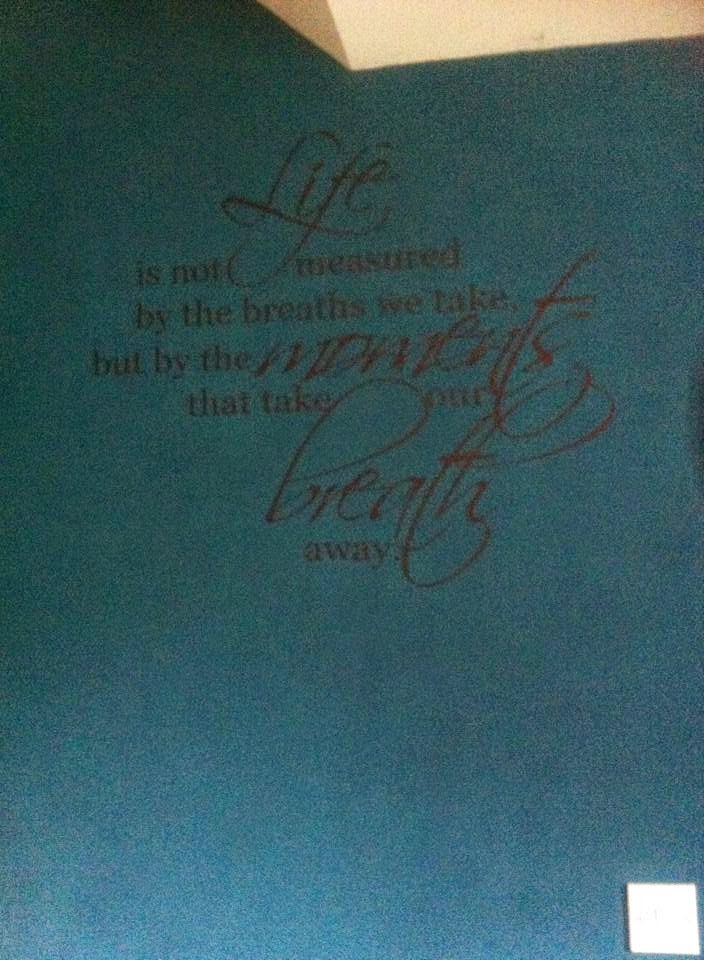 Why this decal when there are thousands?

I chose this particular wording as all along my stairs I have canvas prints of particular photos I love. Each one triggers a memory for me. Two of these are from my friends' wedding and every time I walk past them it reminds me of that day and also of them both. (Hello Steph as I know you read this.)

There's also a very large canvas print of Alyssa which I won in a voting competition. 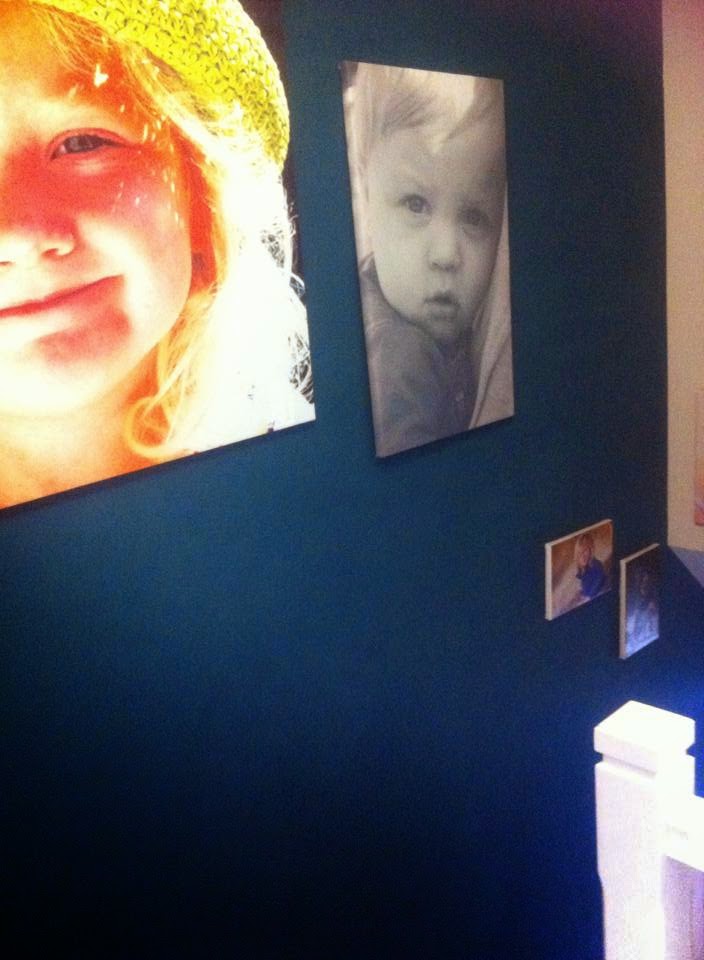 Harvey has a black and white picture of him where he was cuddled onto me when he was younger. His eyes are absolutely beautiful in that photograph and I adore it.

Eventually, I hope to fill up my stairway with these kind of memories but I have so many photographs, it's really hard to decide which ones 'make the wall'.

avoiding the washing up and attempting to finish some decorating.
Posted by Unknown at 12:00 No comments:


I do love a bit of online grocery shopping mainly because it saves dragging the children with me to the store. Harvey simply cannot stay near the trolley without attempting to 'fix it'. Yes, he is that child that you may have seen laying underneath it as if was a car.

"Pass me a spanner Mummy."

So online shopping is the way forward for us. Yesterday I was trying to be super organised as it was their first day back to school. The shopping arrived and all was great...until I got to the vegetables.

I'd wanted 3 parsnips, just 3. Somehow I had managed to order 3 BAGS of parsnips. Guess we'll be getting our 5 a day for sure this week! Look out for all those parsnip recipes coming up. It's been suggested to make parsnip soup, roasted parsnips,parsnip mash, parsnip chips as well as even putting them in a cake. 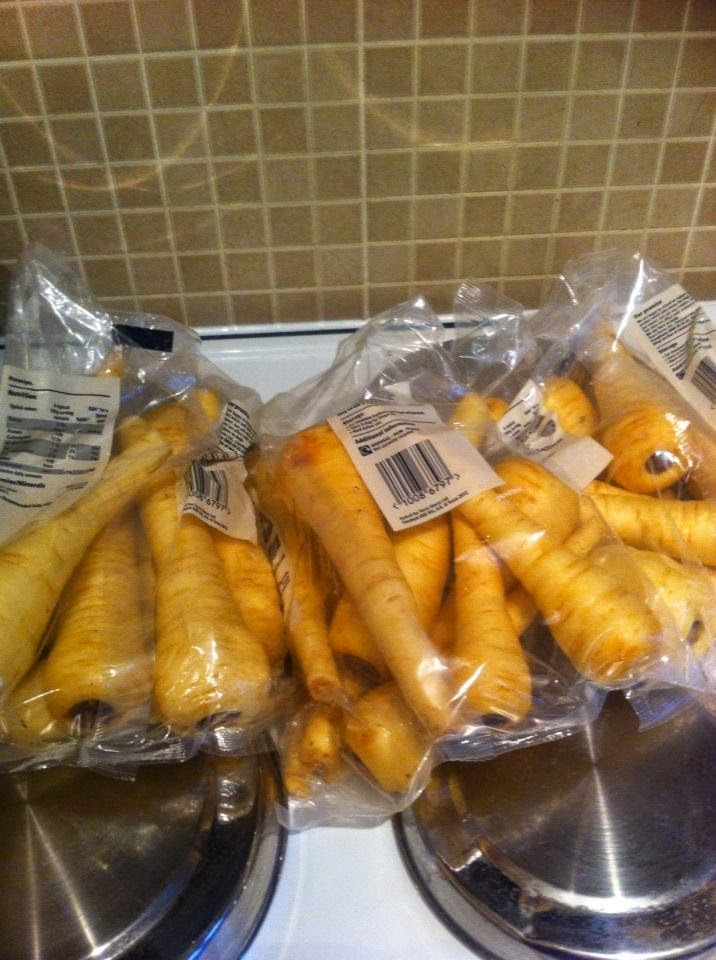 It's Karma though as I told my mum how silly she was when she ordered 12 bags of bananas instead of just 12 single ones.

Have you had any online shopping mishaps?