Sunday 7th June meant that the long awaited Tour of Cambridgeshire was going to head through our little village. It was a huge cycle race which featured 132km of a completely closed off route around The Fens, starting and finishing in Peterborough. There were over 8000 riders so it was going to be pretty spectacular and so Alyssa prepared to make sure she supported all those cyclists that were going past her.

She stayed up late on the Saturday evening finishing off her 3rd attempt of a poster. I tweeted her efforts and it was retweeted which she thought was incredible.

@thetourofcambs best of luck to everyone taking part :) We shall be cheering on in Benwick! pic.twitter.com/olLq3N1RqG
— Emily Shepperson (@novagirl291) June 7, 2015

The Sweetpeas got their deckchairs out and started to wait for the cyclists at half past 11. The first group didn't start to come through until hours after this but Alyssa was determined not to miss one single cyclist.

Harvey had to leave as he was off to a birthday party anyway for the afternoon. 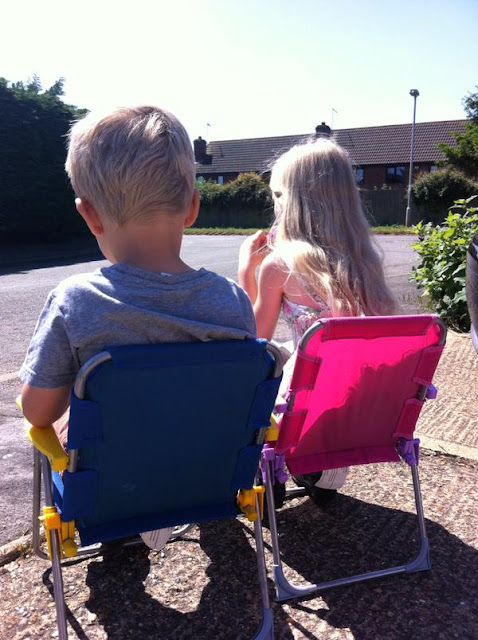 Our little village was completely shut off for the entire afternoon in order for them to race through safely. I valued the quality time with Alyssa especially and was extremely proud of how she wanted to support them. I can understand the frustration from some residents but I feel immensely proud of the first ever UK closed roads 'Gran Fondo' going through our village. Lots of villagers were complaining that they had things to do but hopefully my children will remember the great time we had on that Sunday rather than another potentially mundane trip out of the village. I do completely see that some cases are an emergency and can't be planned ahead so perhaps there could be some kind of "emergency access" for next year then that would be fabulous. (As long as residents didn't abuse the term emergency that is!)

Alyssa was so excited when people would shout "hi Alyssa" or wave to her. She liked that her poster made a few people smile and comments such as "give us a push" or " I'm trying" were heard. I loved how the cyclists tried to involve the crowds of people that formed even though they were obviously hot and probably aching by that point.

@novagirl291 @thetourofcambs I saw your sign - it made me smile and pedal harder! Thanks for the support :)
— Ann Enticknap (@AnnEnticknap1) June 7, 2015


@novagirl291 Thanks Emily for your support today, we were the guys that shouted hi Emily after seeing your sign on Twitter at the beginning
— Jonathan catley (@jonathan_catley) June 7, 2015


Harvey did get to see some of the racing and he particularly liked the people wearing the skeleton tops. They also noticed someone with Wallace and Gromit on them.

Roll on 2016 and look out for Alyssa cheering away in Benwick. We'd love to get some comments from any of the cyclists that took part and saw Alyssa's poster just before the bridge.
Posted by Unknown at 09:50